There is not a surplus of characters in LazyTown, which allows each and every one of them to be significant to plots of various episodes. Among the characters, some of the more important ones include Stephanie, Sportacus, and Robbie Rotten - who are the only human characters, seeing as the rest are puppets. 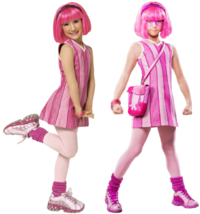 Stephanie is a young girl who loves dancing. She came to live with her Uncle Milford (the town's Mayor) in LazyTown at the beginning of the pilot episode, Welcome to LazyTown. She and Sportacus try to encourage the other children to get up and move and teach them about the value of eating fruits and vegetables, which they call 'sportscandy'. Stephanie's favorite color is pink; she wears pink clothing (usually a pink striped dress and light pink leggings), has pink hair, and most of the stuff she owns is also pink. She loves to play outside and often has a hard time convincing the other kids to come out and play. She is optimistic, her catch phrase being "There's always a way!" and doesn't seem to dislike anyone - she even describes town villain Robbie Rotten as a softie who really likes cake. She writes in a pink diary all the time, talking about her friends and her experiences in LazyTown. The episode was actually dedicated to it, called . She says that her best friend is Trixie, though she seems to spend more time with Ziggy, Stingy, and Sportacus.

Stephanie is played by Julianna Rose Mauriello in Seasons 1, 2 and Extra. The part of Stephanie was taken over by Chloe Lang for Seasons 3 and 4. 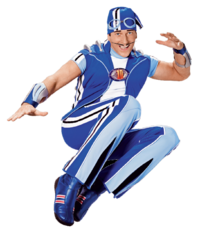 Sportacus is a self-proclaimed 'above average hero' who lives in a giant airship above LazyTown. He is extremely athletic, seemingly unable to sit still or even walk without doing extensive gymnastics, and kind hearted. He rescues the town's residents (even the resident LazyTown kitten) multiple times per episode, and teaches the children valuable lessons, usually about health but sometimes about things like brushing your teeth, getting enough sleep, and not taking things that aren't yours. He wears a stretchy blue outfit with a hat and goggles - even when he sleeps - and has varying degrees of eyebrowness. He makes sure to go to bed at 8:08 every night, with exceptions in the case of Sleepless in LazyTown and Cry Dinosaur, and is always full of energy. He is allergic to sugar, and when he does eat it he instantly falls into an exaggerated sugar crash, that he calls a sugar meltdown, which can only be cured by sportscandy. He speaks with a strong Icelandic accent (explained by having come from an "island in the North Sea") and is identified by the number 10, which is written on his back, his stuff, and on the crystal on his chest. This crystal is magical - it beeps and flashes whenever someone needs to be rescued, usually prompting his infamous phrase "Someone's in trouble!".

Sportacus is played by Magnús Scheving, creator of LazyTown.

Robbie Rotten is the town's villain. He lives underground on the outskirts of town and has a periscope that lets him see what's going on in LazyTown. He is the "Master of Disguise," usually sporting at least one clever (or not-so-clever) disguise each episode. For some reason, he is never recognized in even his most flimsy disguises. He is also a talented inventor, although his inventions are always used to try to either make LazyTown lazy or get rid of Sportacus "FOREVER!". Robbie's lair includes a fuzzy orange chair, a retro telephone, five tubes holding disguises, a disguise machine, and a tunnel leading to the outside. He loves being lazy and eating junk food, but often ends up doing a lot of activity when executing his schemes. He is very dramatic in his actions and facial expressions, and is not very graceful. His favorite color is a dark purple, and he wears a striped suit of two shades of purple as well as purple eye shadow. His chin is very large as are his teeth, and his hair is so shellacked as to look plastic.

Milford Meanswell is the mayor of LazyTown and Stephanie's uncle. He is rather dense and absent-minded, but his intentions are always good. He has a serious crush on Miss Busybody (who is also his secretary and is the only adult woman shown in LazyTown) and is always trying to impress her.

Mayor Meanswell is performed and voiced by David Matthew Feldman.

Bessie Busybody is Mayor Meanswell's secretary and the town gossip. She loves to talk on the telephone, although we rarely know who to whom she is talking. She has blue hair and wears red lipstick, and has a crush on the mayor that is (so far) never quite acted upon.

Bessie Busybody is performed and voiced by Julie Westwood.

Trixie is, as her name suggests, a trickster. She loves to play tricks on other people and is quite bossy. She often calls Stephanie 'pinky' even though they are best friends, and can sometimes be mean to others.

Pixel is a technological whiz kid. He invents all sorts of machines and gizmos, and spends much of his time playing video games. His room looks like a Nasa control room, with computer monitors everywhere. He always wears a headset over his very orange hair, and carries all sorts of techno-whatsits with him wherever he goes. He doesn't usually get to bed at a decent time because he plays video games late into the night, and has a tendency to have technology do everything for him, including tying his shoes and brushing his teeth. Pixel has a crush on Stephanie, although it's mostly seen during the pilot episode.

Stingy is a little miser whose motto is "It's mine!". He has trouble sharing and is extremely greedy. His father is the richest man in town, and Stingy is used to getting whatever he wants. His most prized possessions are his car and his piggy bank, which he often refers to as 'Piggy'. Also worthy of note is the inference that he is also eight years old, as in the episode Happy Brush Day, he tells Robbie Rotten, who is disguised as "The Birthday Fairy," that he owes him "eight years of back-presents, with interest."

Ziggy is the youngest character in Lazytown. His idol is Sportacus and he has a love for candy.

Ziggy is performed and voiced by Guðmundur Þór Kárason. Lorraine Pascloe voices Ziggy in all seasons in the UK dub.

Jives was originally going to be used in the television series, but was scrapped. However, his tall, curvy house can sometimes be seen in the background.

Penny was a money-obsessed girl that was introduced in Áfram Latibær. As the character was scrapped by the sequel, Glanni Glæpur í Latabæ, she was never considered for the TV series.

Officer Obtuse was LazyTown's bumbling police officer. He was scrapped before the television series with most of his role being absorbed into Milford and Sportacus.

Sometimes a new character will feature just for a single episode. These include...

Retrieved from "https://wiki.lazytown.eu/index.php?title=Characters&oldid=6297"
This page was last edited on 30 October 2019, at 23:09.
Privacy policy
About LazyTown Wiki
Disclaimers