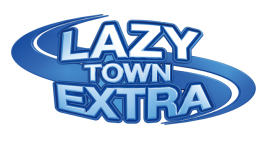 The titlecard for Lazytown Extra. 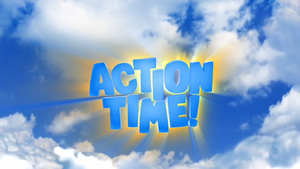 LazyTown Extra is a a spin-off television series which debuted in the UK on CBeebies on September 15, 2008. A "magazine format style show" for 3- to 6-year-olds, it features characters from LazyTown in an assortment of short sketches. 26 episodes of LazyTown Extra have been produced, each between 11 and 15 minutes in duration. Several characters are voiced by different actors from those who performed in LazyTown.

The programme features different short sketches featuring the citizens of LazyTown. In the main segment Ziggy, the show's main protagonist, is on the move at different locations around the UK, learning about different sports, exercise, fun facts. These typically entail him misinterpreting a sport and being corrected by children, passively watching a sport or warm up in play and then interviewing them with a mix of serious and quirky questions, often involving sports candy. These scenes are punctuated with skits with other characters. Sometimes these will be educational in someway, and involve Sportacus teaching children stretches, or Stephanie demonstrating choreography moves to her dances to songs from the main series. Other times, they will be comedic character pieces using characters such as Mayor Meanswell, Stingy and Robbie Rotten based on the theme of the episode.

There is also a variation of the premise called Action Time! The most notable change is that Ziggy isn't visiting kids around the world, instead he is in a room talking about the topic of the episode. This was likely done to make it easier to dub the episodes in other languages. Some countries like Spain and Brazil have their own version of the Ziggy on location scenes which is filmed in their country and the kids speak their language, but Spain also included the Action Time! Ziggy scenes as well as the Ziggy on location scenes which made the episodes a bit longer than other countries. The Action time! version of the episode Picnic Time was changed to "let's warm up" and is based on warming up but still has the same character segments (apart from Ziggy) from the episode "picnic time"

Retrieved from "https://wiki.lazytown.eu/index.php?title=LazyTown_Extra&oldid=4803"
This page was last edited on 4 February 2017, at 16:52.
Privacy policy
About LazyTown Wiki
Disclaimers